The VT983 is a data acquisition platform capable of synchronous sampling. It has Quad ADC 16-bit @ 250 MSPS (TI ADS42JB69) and a 16-bit DAC @ 250 MSPS (Maxim MAX5878). All input data channels pass through a Virtex-7 690T which is user programmable for filtering/DDC and analysis. The 690T FPGA interfaces to the Jetson TX2 via PCIe x4. Rear Panel USB and HDMI are available for user interface, making the VT983 ideal as a base platform for comprehensive signal monitoring systems. Also, the module has an M.2 socket with SATA interface for storage which interfaces to the Jetson TX2 and an SHDC socket.

The VT983 has a Layer 2 Managed Gigabit Ethernet Switch which provides dual GbE through RJ-45 interface to the Rear Panel and allows interconnection among the subsystems. The cooling is from right to left with the intelligent fan controller. 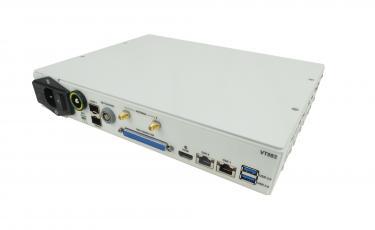